If you know me, you know that I’m a big Wes Anderson fan. It’s really hard to pick a movie, but I guess based on the fact I have a Grand Budapest Hotel inspired tattoo on me, that would be it.

There’s something about the movies he makes, and the places he creates, that’s so magical. I want to live in one. And to be honest, if I had one outlandish dream, it would be to work on one of his movies. I mean, like making coffee for everyone would be enough. I can’t imagine how proud the people who make his films are. To quote Owen Wilson, WOW.

I could gush for a long time on that subject. You may also know from my previous posts that I’m a BIG Shining fan. It’s an equally magical film, but obviously in a very different way. I was really excited to see it be featured so much in the Ready Player One movie I just saw in theatres (which is another story, it was good, but maybe not for me).

So one day I was sitting and stewing, like I always am, and I was like WHAT ABOUT GRAND OVERLOOK HOTEL?! Like a mashup of two of my fav movies!!!! Then I googled it and it looked like someone else had come up with the idea already, but it was in video form, so I shot them an email and asked if they would be cool with me creating my own spin on the mashup, which they said “go for it!”.  You can see their video below:

Enough beating around the bush, I designed a keychain off the idea. It features  a colour palette with pinks from the Grand Budapest Hotel, and greens from The Shining (bathroom scene). It also features champagne, because duh, Llyod is gonna whip one up for ya. It also has the room number 237, because of the spooky scene from The Shining. Arrow designs to represent the native american burial ground The Overlook Hotel is built on in The Shining (that makes everyone go crazy!). A tassel like all the other hotels from the Society of Crossed keys that are featured in The Grand Budapest Hotel, and well as some just general 1930s looking design.

The packaging is an invite to come out to the 1921 July 4th Ball (the one that Jack Torrance is pictured in at the end of The Shining), where you can dance until forever and ever. It’s also wrapped in a Grand Budapest Hotel blue coloured ribbon.

Well, thats the description, how about some photos? 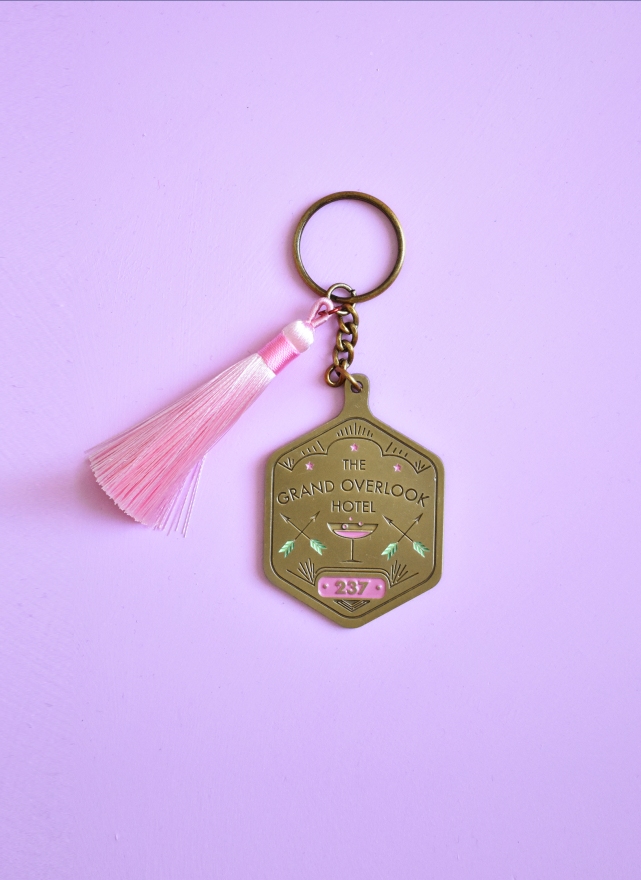 I’m super happy with how these pretty babies turned out, if you want one for yourself or a gift for a pal, you can shop on my etsy store here.