So here is a movie that I kept thinking was a Jame Bond movie (Casino Royale, they are 2 different movies). I first became aware of this movie while wandering through HMV seeing the cover of the DVD and thinking it looked neat: 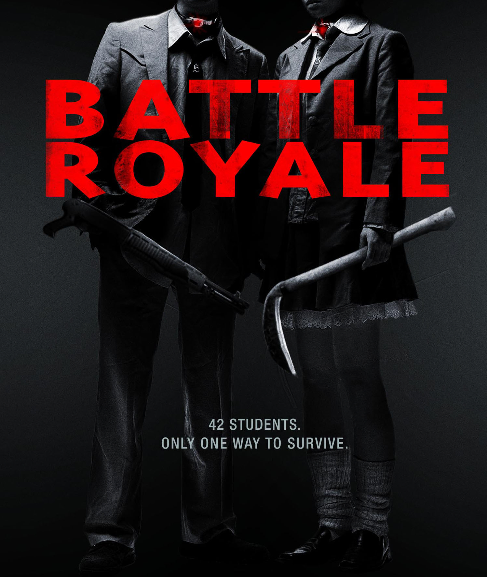 I guess the story goes that this movie was made in 2000, but this year was re-released due to the fact that it is basically a Japanese Hunger Games. It is a really good movie. Totally interesting from the first couple of minutes. It’s a little gory, so if you’re not into violence and stuff like that then it’s maybe not for you. I found it to be less intense then Hunger Games. I was on the edge of my seat the entire movie, but for Battle Royale, it was slightly less scary for some reason. There were actually some semi-funny parts. I’m not going to explain the premise of the movie, but it’s literally the same as Hunger Games, the only difference is that it’s a class of kids instead of a district. The kids are being punished because they started being the jerks of society and grown ups have had enough.

I definitely recommend this movie if you can get your hands on it!

Not many of these bad boys in the shop - get them while u can! #noscrubs
PSA: Creating stuff is very fun and cool. What’s not cool is stealing other people’s artwork to pass off as your own. I’m not going to name names (unless I get a rude response from my polite message to stop stealing my work, please!) but like, my dudes, if you can’t be creative and you have to rely on stealing other people’s work it’s not for you. Or if you have the desire to make things, but can’t come up with an original idea/design HIRE A CREATIVE PERSON! There’s lots of them out there that want to help you make stuff! So, my hope is that some misguided person sees this and decides not to steal someone else’s work. Thanks for reading ❤️ #stoparttheft
I read this quote a couple weeks ago and I keep trying to remember it when things seem like they’re not going so hot. So, I’m hanging this print up and I’m going to look at it daily and remind myself to try to make the best of it ❤️ it’s also available in my Etsy shop, link in my stories #quote #quotes #typography #etsy #typographyquotes #typographyprint
Same
The perfect Valentine is spelled D-O-G ❤️ #valentinesday #valentines #dog #doglover #dogloversofinstagram