Did you watch the Oscars? If not, you didn’t miss much. I mean, you missed a little, but basically here are the highlights: 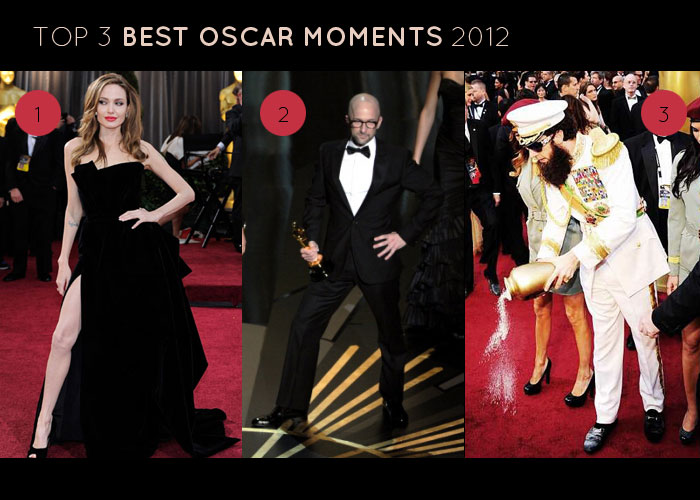 1. Angelina Jolie awkwardly posing so that her entire leg was through the slit of your dress. The first time it happened on the red carpet I was like that’s lame. Then the second time when she was presenting the Oscar it became ridiculous how hard she was posing to make sure her leg was outside of her dress. I believe I was yelling at the TV about how silly it was. I’m glad other people noticed as well, which brings me to…

2. Jim Rash and the other men responsible for The Descendants accepted the award from Angelina. Apparently only one of them was allowed to talk so Jim Rash did the most hilarious thing ever and made fun of Angelina for being such a tool. I’m sure people are working feverishly to make it look like he wasn’t making fun of her, because heaven forbid such a thing could happen, but I’m pretty sure her was. And it was hilarious. High praise to Jim Rash for having a set.

3. Sacha Baron Cohen got all up in Seacrest’s face and spilled fake ashes all over him on the red carpet. It was funny, I felt a little bad for Ryan Seacrest cause he seems like an okay dude, but he was super professional about it, so congrats to him! Too bad Sacha hadn’t accounted for being upstaged by Angie’s gams. Or gam, I guess.

Okay now for the dresses. My favourite of the evening was worn by Michelle Williams. It looks red, but apparently it was coral. Either way it was really pretty and although not daring was unique. 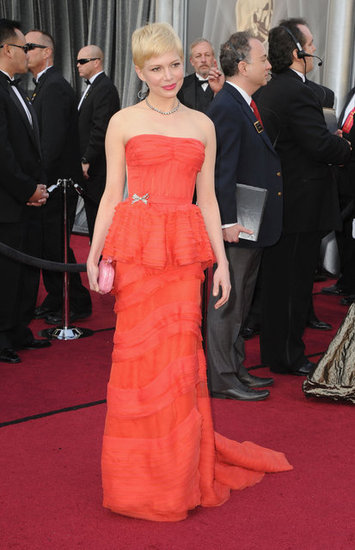 Another favourite was Kristen Wiig. I think I’ve seen her in something similar before, but it suits her and it was really pretty. I might agree with the fashion people that she could have done her hair a little fancier, but she did look very pretty and elegant. 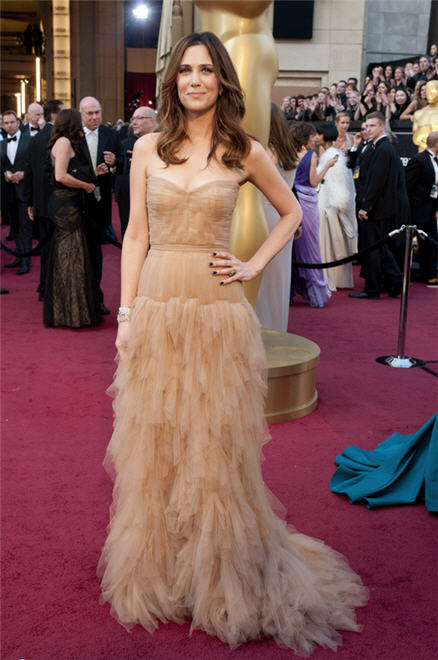 And lastly Emma Stone in a bright red neck-bow dress. It was the only one of it’s kind on the carpet and wasn’t something extremely typical, so I like it. Apparently it was very similar to a dress Nicole Kidman wore a few years ago, but I like Emma Stone better, so… 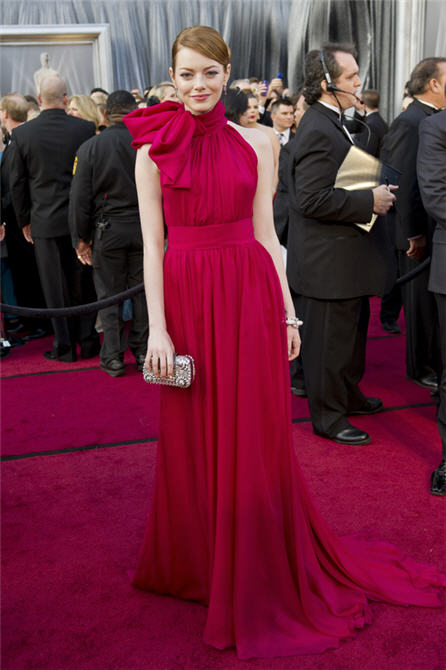 Anyways those are pretty much the only highlights. There were a lot of very average dresses and jewelry and hairstyles so it didn’t feel like a very exciting event, but next award season I have high hopes.

Also in case you missed it I have Twitter! And even though the Oscars are over I’m still tweeting random things follow me @Kristenlourie